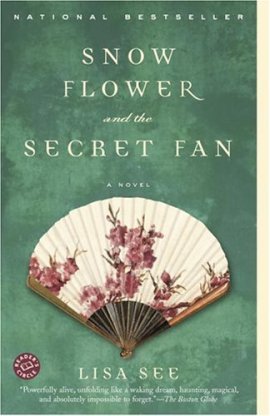 In nineteenth-century China, in a remote Hunan county, a girl named Lily, at the tender age of seven, is paired with a laotong, “old same,” in an emotional match that will last a lifetime. The laotong, Snow Flower, introduces herself by sending Lily a silk fan on which she’s painted a poem in nu shu, a unique language that Chinese women created in order to communicate in secret, away from the influence of men.

As the years pass, Lily and Snow Flower send messages on fans and compose stories on handkerchiefs, reaching out of isolation to share their hopes, dreams, and accomplishments. Together, they endure the agony of foot-binding, and reflect upon their arranged marriages, shared loneliness, and the joys and tragedies of motherhood. The two find solace, developing a bond that keeps their spirits alive. But when a misunderstanding arises, their deep friendship suddenly threatens to tear apart.

Wow. It’s hard for me to put into words how much I loved See’s novel. This wonderfully-written tale transported me back to nineteenth-century China and even though the relationship develops between two, I felt like I was the third friend in this unique alliance. I struggled to put the book down even when changing planes in Germany.

See’s novel is such an interesting examination of the role of women in Chinese culture. The story of these two girls (as well as Lily’s younger sister and cousin) center upon the excruciating pain they experience during foot binding. This horrific process was meant to make women’s feet as small as possible because tiny feet were seen as more desirable, more erotic than normal-sized (called “big footed”) feet. Women with bound feet were/appeared wealthier since these women could not walk and therefore perform strenuous tasks in the fields. What people forget and that See illuminated is how women died from foot binding.

While foot-binding in a staple of books about women in China, but this is the first account of nu shu I’ve seen in both the fictional and nonfictional realms. In a time where women were overwhelmingly illiterate I just think it’s amazing that women in Jiangyong Country in the Hunan province of China created this syllabic script, a simplification of Chinese characters.

Throughout the novel Lily echoes the words of her mother, the words of her grandmother, and the words of her female ancestors – women are worthless and only around the help bring more men into the world. These words cloud not only her own feelings about herself but also that of her friendship with Snow Flower and relationship with her daughter. Such an interesting tale.