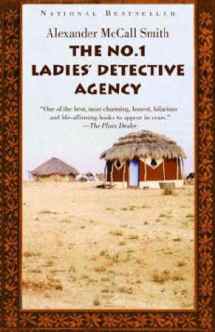 I started the first book in Smith’s series a couple years ago but ended up abandoning the book was I was just not into the tale of Precious Ramotswe and her detective agency. Upon restarting this tale I decided that I gave up soon after Happy’s paternity was established. I decided to restart Smith’s book at this time because I wanted to read more fiction set in Africa after reading a book set in the Congo a couple weeks ago.

“Mma Ramotswe did not want Africa to change. She did not want her people to become like everybody else, soulless, selfish, forgetful of what it means to be an African, or, worse still, ashamed of Africa. She would not be anything but an African, never, even if somebody came up to her and said “Here is a pill, the very latest thing. Take it and it will make you into an American.” She would say no. Never. No thank you.” (pg. 215)

Set in Botswana, this book features thirty-five year old Mma Ramotswe. A woman who, after her father dies leaving her many head of cattle, sells the cattle and opens a detective agency. Women from around the country hire her to track missing husbands, cheating husbands and thieving husbands.

But in this particular book, Mma Ramotswe’s attention is captured by a letter sent to her by a distraught father whose only son has disappeared into thin air. This mystery pulls her into a search amongst the unacknowledged, embarrassing witch doctors of Botswana.

The book is more of a collection of vignettes than a novel. Unlike a traditional mysteries, the focus is not on the mysteries themselves but the culture behind them and the women who tries to solve them. Gender issues in Botswana, for example. Mma Ramotswe comments off the cuff repeatedly that women in the country do all the work while the men lounge around. And interesting snippet that factors into many of the mysteries Mma Ramotswe solves but nothing something the novel sets out to address.

Upon finishing this book I told a friend who asked me about this book that I liked it and, if subsequent books were laying around the house, I would pick them up and read them. I am still not sure if I will actively search out the next book(s) in the series, but I am sure that I enjoyed reading this book and am glad to finally have read it.