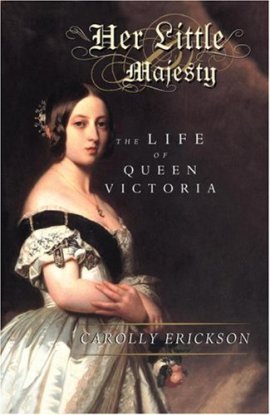 Subtitled “The Life of Queen Victoria”, Erickson’s biography seems to focus more on the issues surrounding the Queen and her reaction to them rather than her personally. The book also written more like a novel than a tome of scholarly work (not to say that it isn’t scholarly), and therefore spends sometime starting sentences with worlds like “Victoria must have felt”.

With biographies I would expect a time line, genealogy, and maybe a few maps, but of these are included in this work. It’s also difficult at times to discern what was fact and what is speculation due to the limited number of footnotes and annotations in the text.

Some of the more interesting parts where the role of women in that society and the conflict this presented in the fact that a woman was the ruler, which might of had a large part to do with her dependence on Albert as women were expected to submissive towards men. Their relationship was nothing like it was portrayed in “The Young Victoria”, which was what inspired me to read about Queen Victoria in the first place.

It’s also kind of hard to imagine that Victoria’s subjects vacillated between liking the Queen and hating her as well as disliked her husband based on the sheer number of monuments and tributes to her and Albert I saw during my trip to London. But Erickson asserts that the monuments to Albert were built at the behest of Victoria, who wanted her subjects to get over their dislike for the man she loved.

The conflicts amongst her family were just as they were portrayed in the movie, though. And I did think it was interesting to see how this translated into her own relationships with her children. One thing I was surprised at is hemophilia in Victoria’s family. I knew that it was passed down through royal families around Europe (Tsar Nicholas II’s son, for example) because all of them were related to Victoria, but I had no idea one of her own sons was a “bleeder”. I certainly would like to read a book on this topic in the future as well as a book on the history of Buckingham Palace because it seemed like a horrid place to live in Victoria’s time. Raw sewage running down the walls? No thank you.