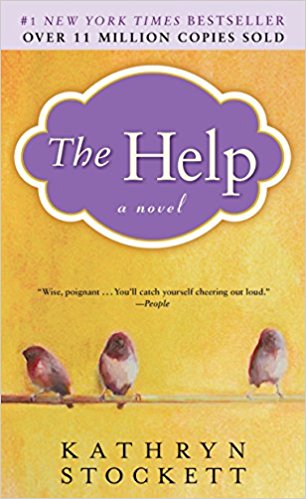 Several book bloggers have raved about The Help and named it one of the top books of their year. The book was also longlisted for the Orange Prize. (Not that I’m really known for paying attention to book prizes.) I was excited to finally read Stockett’s first novel and find out for myself.

(Side note: As much as I am known for liking birds, I like this cover much better. I think it fits the novel more than birds on a wire and is, shall we say, more provocative.)

New college graduate Eugenia Phelan — known as Skeeter by just about everyone — wishes to find solace about the disappearance of her beloved maid, Constantine, but no one will tell her where Constantine has gone. Her search for answers and wish to become a journalist rather than a wife combined with disgust over her friend Hilly’s new initative to get the people of Jackson, Mississippi to build separate bathrooms in their garages for their colored help convinces her to interview the help about what it’s like working for white women.

Stockett’s novel focuses mostly on Aibileen and Minny, the colored help, and the relationships they have with their employers and the white children they raise. It’s these women that really make the story come alive; these women whom I cared about most as Skeeter annoyed me at times. She was fairly underdeveloped, and her boyfriend felt like filler to me. And Hilly was such a caraciture that I couldn’t help but laugh at times.

The novel deals mostly with the idea that white women and colored women cannot be “friends” due to the imbalance of power and, therefore, the idea that the help are loved by their employing families glosses over this fact. At times the novel covered the incredible cruelty and violence that black people routinely endured, but would then backpedal the whole thing into one of the broader themes. Like Stockett was going to go for it and then changed her mind.

But then I got to the section entitled “Too Little, Too Late” where Stockett talks about how her own experiences growing up in the South and I started to look at the book in a different way. Like maybe I could forgive the backpedaling.  It’s not perfect by any means, but I thought it was an interesting tale. I liked the concept of the novel, didn’t love the ending, but still thought it was good for what it was. I just wish it was more.