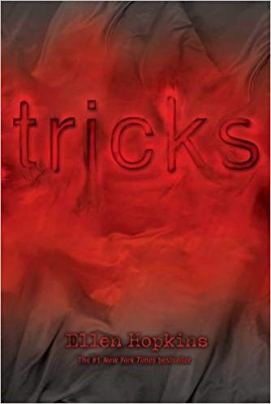 Usually I enjoy Hopkin’s novels. The poetic prose manages to tackle drug use and other difficult topics in a way that seems but frightening — incredibly frightening — and beautiful at the same time. Her novels make me thankful for the life I lead and aware that one wrong turn could have sent me spiraling out of control  like the characters in her novels. That’s how real her characters are.

However, I just could not get into her latest novel that follows the lives of five teenagers — three girls, two guys; four straight, one gay; some with good families and some with no one at all — as they discover the wrong kind of “I Love You”. The kind of “I Love You” sends you spiraling into the world of prostitution and drug addiction.

Maybe it’s because there were five characters, which made it difficult to follow along as the stories don’t interconnect until near the end of the novel. I felt like I was forcing myself to read some of the characters stories rather than enjoying them, and there wasn’t enough about the characters I was interested in. There are a lot of salacious details in this novel, and very little time is spent talking about the consequences of her characters’ actions, which is very different from her other novels were her characters do face consequences (pregnancy, disease, inability to beat their addiction).

So, no, I did not enjoy reading this one. And I suggest skipping this one in favor of her other novels.