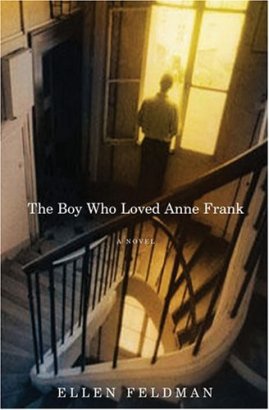 In 1994, while visiting Anne Frank’s secret annex in Amsterdam, Feldman was told there was no information on what happened to the boy Anne feel in love with, Peter van Daan (real name Peter van Pels). Later she learned that  Peter perished in Mauthausen concentration camp on May 5, 1945, three days before it was liberated. But by then, as she states in her acknowledgments at the end, her imagination had taken off, and she eventually wrote this very interesting account of what could had happened had Peter survived and had he, like so many other survivors, decided to hid his Jewish identity and what happened to him.

Peter, who immigrated to the United States, has managed to keep his Jewish identity a secret for years; a secret even from his wife and his children. But at the beginning of the story, Peter has lost his voice for no explainable reason and his attempts to discover why ask interesting questions about the long term consequences for a victim of an unspeakable crime. How long can Peter say in denial? Is his suffering more common than we might think? Interesting questions sparked by a clearly fictional account.

But the story only really starts to get good after Peter decides to come clean, so to say, about his time in the Annex and the concentration camps. Anne’s writings about how Mr. van Daan stole bread from the mouth of his son (a purely fictional account, according to Peter) spurs him to attempts to reach out to Otto Frank and eventually visit the Annex itself. The title, though, is deceptive as Peter spends very little time recounting his time in the Annex with Anne or their budding romance.

Personally, I thought this book was just okay as it’s a bit slow to begin and I wasn’t to fond of the ending. I found it mostly interesting because of the questions it raises rather than the idea of Peter surviving the Holocaust. The psychology of the main character was what kept me reading.