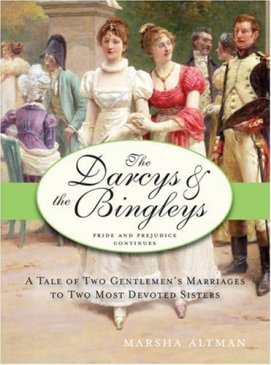 I’ll admit it. I was scared away from Altman’s sequel to Pride and Prejudice by the blurb on the back of the book stating that “Bingley is shocked when Darcy gives him a copy of The Kama Sutra — but it does tell him everything he needs to know” and “Jane finds this remarkable volume and it utmost secrecy shows it to her dear sister Elizabeth, who goes searching for a copy in the Pemberley library”. I don’t mind a somewhat smutty sequel, but I didn’t really want to read an entire book where the Darcys and the Bingleys make their way through The Kama Sutra. Just not my cup of tea.

But I guess I should have read other book bloggers’ reviews more carefully because this sequel, subtitled “A Tale of Two Gentlemen’s Marriages to Two Most Devoted Sisters” is really nothing like the blurb on the back. The Darcys and the Bingleys do use The Kama Sutra (or Translations as it is referred to in the novel), but it’s more for comedic relief as the Darcys and the Bingleys navigate the first two years of their marriage.

Most of the novel concentrates on who’s having babies and what to name said babies, but towards the end the issue of the questionable engagement of Miss Caroline Bingley to a member of Scottish nobility.  And then from there I began to lose interest in the story. There were a couple of instances where things didn’t quite make sense like Mr. Bennet not wanting the Bingleys to name their daughter Elizabeth because he’s worried he’ll become confused but he’s perfectly content with Jane and Charles naming their daughter Georgiana despite their being another Georgiana in the family. Darcy is also a total lush, which bothered me, and there were instances were Altman used phrases nonexistent during the Regency period (“barefoot and pregnant”, for example).

Despite its flaws, I did find myself chuckling as the story progressed and generally amused. Just not the best Pride and Prejudice sequel out there.