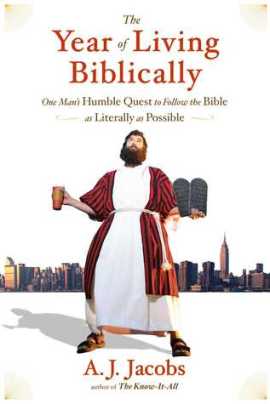 Jacobs, a man who claims he is “Jewish in the same way the Olive Garden is an Italian restaurant”, decides he is going to follow every rule, every instruction, and every tidbit of advice the Bible has to offer. The first two-thirds of the book are dominated by the Old Testament, and Jacobs plans to follow and explore the New Testament for the last three months of his year literally living the Bible. Interesting premise, no?

I found the first 100 or so pages to find very funny. Not in a poking-fun-of-religion funny, but funny in the way Jacobs presented his journey. After all, to go from shaving everyday to growing your beard out to your chest is bound to present some humorous material. It’s until Jacobs and his wife takes the instruction to “be fruitful and multiple” seriously that the humor stops because the way he talks about his wife (and his son) isn’t comical.

Jacobs picks and chooses what rules to follow and when to follow them; a decision he says reflects modern-day Christianity and Judaism because even Hasidic Jews and fundamentalist Christians pick and choose what to follow. That maybe be true (animal sacrifice is a little difficult in New York City), but it’s also in contrast with his goal – to follow the Bible literally and document his journey. As a self-described workaholic, Jacobs is unable to keep basic rules such as keeping the Sabbath, and while I know that keeping all 700-plus rules must be an insurmountable attack, I started to feel as though this journey became more and more about his parenting skills and his interactions with his son, Jasper. This is especially true after he reached the New Testament because he begins to talk more and more about becoming/being a father to twin boys. Plus, there’s quite a bit of boasting about how he wrote a book studying the encyclopedia from A to Z, and complaining about the fact that people have written negative reviews of The Know-It-All, which lowers his rating on Amazon. (Guess he won’t like this one.)

An interesting premise that includes trips to visit the Amish and an ex-uncle that became an Orthodox Jew after experimenting with every other religion, but one that ultimately fell on its face.