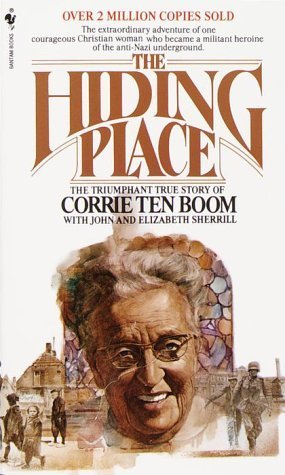 Fifty-year-old Corrie ten Boom awakens from her sickbed to see an old man being shoved into the cupboard along the side wall of her room by a younger woman. Despite her sickness, the spinster leaps from her bed to help push a wheezing elderly woman into the same cupboard, which leads to the secret room built for the very purpose of hiding these people — the hunted Jews of Holland.

Since May 1942, Corrie — along with her spinster sister Betsie and their father — hid Jewish refugees in her home, the Beje, and took an active role in the resistance movement while using her father’s watch business as a front for their activities, but on this day, February 28, 1944, their activities are quickly coming to a grinding halt.

I devoured this book on my flight from Montana to Minneapolis; I opened it to the first page as soon as I got on the plane and finished it as soon as the wheels touched down, never once looking up. I can remember starting to read this book once when I was much younger (around eight, I think), but I had such horrific nightmares I had to stop. Now I’m not such why (other than age) because ten Boom’s account is incredible and inspirational. For ten Boom, her work was merely the job of humanity and her suffering was the trial of her faith, which guides her and Betsie during their time in concentration camps as they struggle to forgive their persecutors and praise God in times of sickness and fleas.

There have been very few books about people who worked against the Nazis that weren’t Jews or weren’t fictional characters that have landed on my shelf, but this is one that certainly sheds light on what happened to those who did help and how they did so. Occasionally, I would stumble on a part that had me wondering if the push for Christianity was by ten Boom or her co-authors, but I certainly will not judge this amazing woman’s memoir on that basis. I will say that I had a bit of a difficulty getting into the book as it begins with ten Boom’s younger years and descriptions of her father’s watch shop. Regardless, though, this is another inspirational and well-written memoir I plan to hang on to for quite some time.