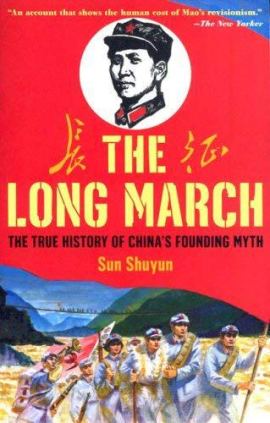 Shuyun interviews survivors from all walks of life — men and women, those who entered as children and as adults, conscripted and enlisted — and is shocked to learn that the heroic tale that every Chinese child learns in school ignores important facts, disregards the reality of violent purges within and at the hand of the Red Army, exaggerates the volatility of  river crossings and death tolls, and turns a military retreat into courageous stand against the rich and the Nationalists.

“Mao’s foresight was quite extraordinary. To think of turning the Long March, which was essentially a retreat, into a glorious victory, was itself a stroke of genius. To be able to make it the founding legend of Communist China showed a political acumen, a gift for propaganda, and an optimism and self-assurance that few possess” (pg. 192).

The realities of the Long March did not really surprise me; I expected things such as conscription to be the realities of this war as they are the realities of almost all wars. The difficult conditions Shuyun recounts — resistance from KMT and warlord troops to the environmental conditions as they crossed mountains and plains — was interesting because I really got an understanding of the vastness and differences in climate in China. What I found to be most interesting, though, was Shuyun’s reactions to the truth. Growing up in Communist China where textbooks are propaganda tools, Shuyun was surprised to find something so heroic to be a re-writing of history and, as you read, the more and more it becomes obvious how jaded Shuyun becomes with the Communist Party in China.

The book does become a little confusing towards the end as Shuyun alternates between first-person and third-person, and there are moments when I was not sure who “I” referred to. (Maybe became quotation marks were missing from the beginning of chapters.) Overall, this is an interesting account of an achievement in both the history of China and Shuyun’s personal history.