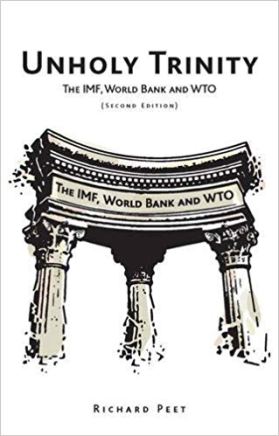 The first edition of Unholy Trinity was co-written and titled by students who took the same class I’m currently taking. This edition, though, is definitely all Professor Peet. While it’s not nearly as confusing as Geography of Power, this book goes off on tangent after tangent.

Unholy Trinity delves into what Peet considers to be undemocratic, American-dominated organizations that operates more as corporations than organizations committed to every member country’s interest. Peet does a good job of introducing the International Monetary Fund and the World Trade Organization both in historical context and their current form, but the third member of this unholy triad, the World Bank, is virtually ignored by Peet as it’s given the least amount of attention.

The problem is, though, that Peet takes the long road to his point, and while he chases his tangents, I either lose focus on what he’s saying or I zero in on his tangent instead of his point. I hate how he refers to himself in the Royal ‘We’, and I wish he would write his books the way he talks — simple, straightforward. Instead, Peet writes confusing things like:

“These diverse articulations, between the global and the local, can be described using a set of geopolitical terms that combine the political-discursive-rational dimension with the geographical-organizational-power dimension.” (pg. 23)

No wonder so many people come to discussion group scratching their heads.

Regardless, if you can get past the confusing language, Unholy Trinity is a pretty good introduction to reasons to the anit-IMF, World Bank, and WTO camp. However, the greatest downfall of this book is the fact that there is very little discussion of the other side, of why there are some who are pro-IMF, World Bank, and WTO. He’s offers some pieces of  pro-opinion in order to critique it, but ultimately replies upon critiques of his tangent topics to carry his argument.