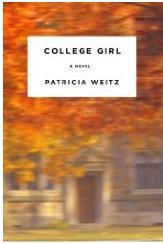 Weitz’s novel, the first book I checked out of my new library, caught my eye because, well, in a few days I’ll be one myself. That’s where I hope the similarities end because College Girl‘s main character, Natalie, is a poor girl embarrassed by her lack of money and lack of experience at her upper-class East Class college. She’s also incredibly whiny and despite being the driving force for her academic achievements, refuses to take responsibility for her actions or feelings.

When her grades begin to slip because she’s so wrapped up in her relationship with her first “boyfriend,” she tells her adviser it’s not her fault. She tells her roommate and another floor mate that everything is fun, but then gets angry when no one is around to help her out of her mess. She blames her parents and brothers for her failures and for not being more like her, although she doesn’t give them a single opportunity to get to know her.

But what really destroyed any possibility of truly enjoying this novel was even when Natalie gets redemption and finally hooks up with the “nice boy” in the background, Jack, she is still forced into sexual activities.

“…I squeezed my eyes shut, hard, and lay my head back on the pillow. Tears started to fall as my pants slipped over my hips, followed by my underwear. ‘Stop,’ I said. He didn’t stop. ‘Please?’ I begged. He kept going, and after a minute, I relented…” (pg. 312)

Yet, Natalie is actually grateful to Jack for not respecting her wishes. “I said no, but I really meant yes”  is an incredibly irresponsible message to send to readers, especially the young women who pick this book up for the same reason as me, and really makes me question Weitz.

A thoroughly depressing book and a quick read, College Girl was enjoyable in the beginning, but quickly took a turn for the worse and sends the wrong message. It’s rape when your first boyfriend does it, but not when the “nice boy in the background” does it? Yuck.