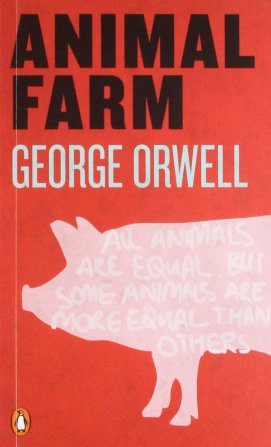 Animal Farm is, hands down, one of my favorite books. In fact, my copy is missing the back cover; it fell off somewhere between reread number eleven and twelve. I was introduced to Orwell’s most popular work during my sophomore year of high school, and it’s because of Animal Farm that I found the real beauty in symbolism that smacks you in the face or is subtly placed.

For those who aren’t familiar with the novel, the animals on a farm in England rise up against their cruel owner and farmer, Mr. Jones, which represents Tsar Nicholas II and The Bolsheviks Revolution. They take over the farm and rename it Animal Farm, which represents USSR, due to a vision given to them by Old Major, a pig who dies almost immediately after the uprising.

In keeping with Orwell’s own socialist beliefs, Old Major’s idea is muddled by another pig, Napoleon, who represents Joseph Stalin. The other animals represent the citizens of USSR, and Animal Farm delves into how absolute power corrupts absolutely.

It’s a wonderful, well-written critique of the communist regime, but also delves into how socialist ideals are corrupted and twisted by power-hungry people, which makes them unappealing for Americans especially. Animal Farm shows how important education is in order to keep yourself safe, and can speak to people both individually and as a group as “absolute power corrupts absolutely” relates to situations I’ve been through and through local, state, national, and international governments.