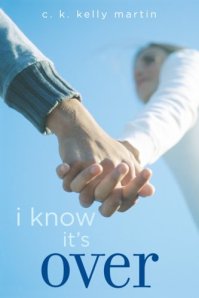 Awkward. If I had to pick one word to describe I Know It’s Over, it would be just that — awkward. It’s not the situation that is entirely awkward for me, especially since I was intrigued by the idea of a novel about an unexpected pregnancy and following abortion from the male teen’s point-of-view. But the characters are awkward, the dialog is awkward, the interactions are awkward.

The necessary details just aren’t there, and the ones that are involved more telling than showing. There’s a heavy reliance upon flashbacks and a character telling you the back story. I prefer it when details are inserted subtly rather than a giant block of information dropped into the reader’s lap, and as the story began I was wondering when Martin would just get on with the story. And when she does, it’s unrealistic and unfocused.

The unrealistic part stems from the parents’ reactions. which really bother me. Nick doesn’t tell his mother until after the fact, but once he does, she just seems to nod her head and move on to the next topic. There’s no reaction, and the only parent that does react is knocked down to a reference. There’s no discussion of what to do amongst the teens or the parents; Sasha’s decision is just an automatic reaction with no one even discussing keeping the baby or putting it up for adoption. I wasn’t bothered by the decision, but I was bothered by how Sasha and Nick reached that decision.

There were bits and pieces of this novel that I liked — the premise, Nick’s reaction to Sasha’s decision — but Sasha doesn’t react, which ultimately killed this novel for me.