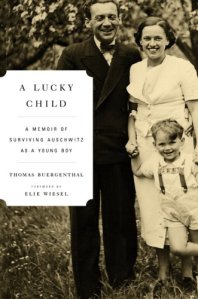 Thomas Buergenthal, now a judge at the International Court of Justice in The Hauge, was not quite six years old when he and his parents were forced into a Jewish ghetto in Poland. For the next four years they struggled there and in two labor camps, until they were placed in a train bound for Auschwitz. Separated first from his mother and then from his father, ten-year-old Thomas managed by his wits and some remarkable strokes of luck to survive Auschwitz and the infamous death march. Eventually liberated from Suchsenhausen, Thomas found himself the unlikely mascot of a Polish Army regiment, witnessed the fall of Berlin, and in 1951 he emigrated to the United States to start a new life.

Buergenthal really was a lucky child; surviving Auschwitz because the guards decided not to stop the train and run through the selection process — strong to the left, weak, elderly, and children to the right — was just one of his luckiest moments, but the one he owes his life to.

“It occured to me then that unlike those who survived Auschitz and can document our existance in that camp by reference to our numbers, those proisoners who died in its crematoriums after the SS had stopped recording their names have left behind no trace of their presence in that terrible place. No bodies, no names only ashes and numbers. It is hard to imagine a greater affront to human dignity.” (pg. 68)

The story, though, doesn’t become really interesting until the moments leading up to Buergenthal’s arrival as Auschwitz due, in part, because the beginning is filled with a lot of “I don’t remember” and “I don’t recall.” I don’t blame him for these gaps in the story; he was after all only five at the time and didn’t write his memoir until decades later, but it still detracts from the overall story. It hard to understand his early plight when there aren’t any details to set the stage.

There is also the issues of the photographs placed in the middle the text, instead of the glossy white pages in the middle of book that usually accompany a memoir. At times they are incredibly helpful in conjuring up images of the location, the setting, and the people, but for the most part they interrupted to flow of the story because a giant photograph would cut a sentence in half and the thought wouldn’t be continued for another page or so.