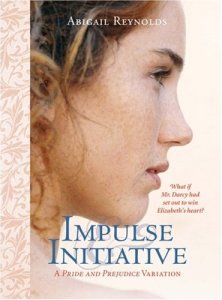 In Impulse & Initiative, instead of avoiding Elizabeth after his ill-fated marriage proposal, Mr. Darcy follows her back to her him in Hertfordshire, planning to prove to her he is a changed man and worthy of her love. And little by little, Elizabeth begins to find the man she despised becoming irresistible.

I immensely enjoyed Impulse & Initiative — probably more than I should have; although I don’t consider myself an Austen purist. Though Austen’s Darcy and Elizabeth Bennett would not have engaged in premarital relations, Reynolds writes Impulse & Initiative in a way so it is almost possible to believe this Darcy and Elizabeth actions are not completely out of character and social customs.

Renyolds replicates quite a bit of Austen’s style and wit, and writes a believable Pride and Prejudice variation — that is if Austen was around in the 21st century. Still, Impulse & Initiative is excessively diverting — a fun, enjoyable read about Darcy passionately wooing reluctant, stubborn Elizabeth.