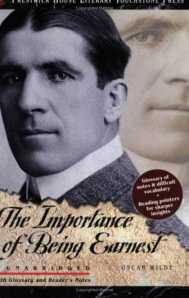 The Importance of Being Earnest is, hands down, one of the best plays I’ve ever read. It’s witty and extremely bright, and my entire class was laughing out loud with every turn of the page, every line read.

The play has been called “a trivial comedy,” but Wilde’s play is a hilarious satire of nineteenth century society that posses a tone throughout is light and clever so that the entire play is simply a joy to watch or read.

We watched the 2002 version of The Importance of Being Earnest starring Colin Firth, Reese Witherspoon, and Judi Dench after we finished reading the play, and while I loved Dench’s portrayal of the scene where Jack/Earnest goes to ask Lady Bracknell for Gwendolen’s hand in marriage, I believe the scene — no, the play — is even funnier when you read it.

“Lady Bracknell: “I do not approve of anything that tampers with natural ignorance. Ignorance is like a delicate exotic fruit; touch it and the bloom is gone. The whole theory of modern education is radically unsound. Fortunately in England, at any rate, education produces no effect whatsoever. If it did, it would prove a serious danger to the upper classes, and probably lead to acts of violence in Grosvenor Square.”

The play is simply entertaining; my entire class was laughing out loud. I can’t imagine anyone not enjoying it.