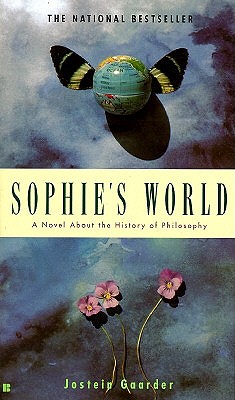 One day Sophie comes home from school to find two questions in her mail: Who are you? Where does the world come from?

Before she knows it, she is enrolled in a correspondence course, covering Socrates to Sartre and beyond, with a mysterious philosopher. But Sophie is receiving a separate batch of equally unusual letters. Who is Hilde? And why does her mail keep turning up in Sophie’s world?

I wasn’t trilled about the prospect of reading this book as I’ve never really be into philosophy. The fact that this novel is required reading for senior English didn’t make it seem any more appealing. It took me about two weeks to finish Sophie’s World. I started it two Fridays ago while on a plane to San Francisco and didn’t finish it until today.

The simplistic writing immediately turned me off when I first began the novel. I like more complex, “flow-y” sentences rather than short sentences like this:

“Sophie Amundsen was on her way home from school. She had walked the first part of the way with Joanna. They had been discussing robots. Joanna thought the human brain was like an advanced computer. Sophie was not certain she agreed.” (pg. 1)

This style of writing grated on me until I was knee-deep in Darwin and Aristotle and Descartes, only then was I able to appreciate the simplistic style. I made keeping each philosopher’s philosophy straight much easier than I believe it would have been if they style had been more elaborate and verbose.

The book is very slow to start. It took me a three and a half hour plan ride to read the first 250 or so pages. Sophie gets a letter, reads it, and…nothing else happens. After that, I really began to enjoy the novel. It was interesting to learn about philosophy, especially in the light-hearted tone Gaarder used. And as the novel/textbook reached the part where philosophy became entangled in religion, I flew through those pages and chapters.

“The development of embryo in mammals. If you compare the embryos of dogs, bats, rabbits, and humans at an early stage, the look so alike that it is hard to tell the difference. You cannot distinguish a human embryo from a rabbit embryo until a very late stage. Shouldn’t this indicate that we are distant relatives?” (pg. 412)

“If Christianity had appealed to our reason, and not to other sides of us, it would not be a question of faith.” (pg. 382)

On a bit of a side note, I found it very unrealistic that no one else thought that it was inappropriate or creepy that a 40-year-old man and a 14-year-old girl were alone together for hours in his house several days a week. Sophie’s mother was very curious about this man, but she never forbade Sophie from seeing him and she only met him after the correspondence course had been going on for several months. Sophie was ditching schoolwork and family to be with this man and was totally obsessed with him. Alberto commanded her in a way that made me uncomfortable at times.

In all, the textbook side of Sophie’s World was wonderful, especially since this book is geared at young adult audiences who have not been introduced to philosophy before. The novel side needed serious work.